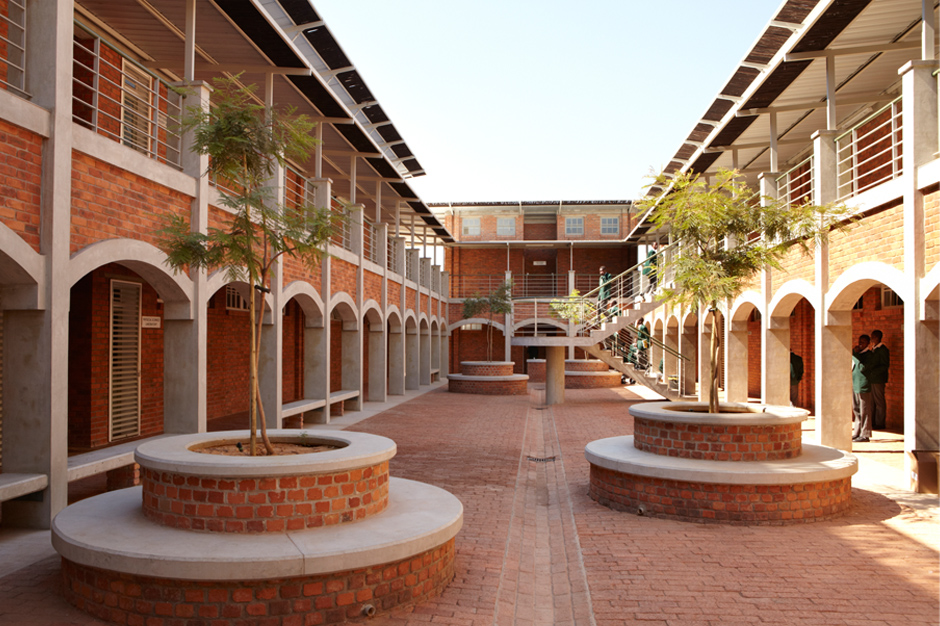 The Ministry of Education recently departed from their single-storey pavilion-type standard schools with Rukonga Vision School. The architects were requested to model the design on private schools in Windhoek and a further private visit to Elkanah School in Cape Town . The Ministry aims to build one such 600-learner pro-poor secondary school in each Namibian region.

Initially slated to be built within a National Park, the site was moved to Divundu township to use the servicing network and provide better social integration with the community. Human-Wildlife conflict is minimized as staff resident in Divundu do not have to brave large numbers of wildlife on their way to work.

The school building’s distinctive arched colonnade contrasts the low maintenance materials of exposed fair-face clay brick infill with off-shutter concrete, echoed in the courtyard benches, some of which surround elevated tree planters filled with Peltophorum africanum saplings. In a few year’s time these trees should create a pleasant microclimate. A stair to the courtyard’s east side and a western ramp between library and laboratories access the first floor, so that all venues are wheelchair accessible. Classrooms and laboratories are larger than the norm to allow for varying class sizes and flexible classroom lay-outs. Teachers can group learners in traditional lecture style, a circle or in small groups according to lesson content. Laboratories are housed in the north wing and classrooms with admin in the south, to cater for the difference in footplate. The wings can also be extended laterally with additional venues. All teaching venues are equipped with smart-boards and learners are issued with special heavy-duty laptops for interactive learning.

The smaller school building footprint led to a much more compact site layout based on a campus concept. It presents a public face to the entry, with the hall and principal’s house on either side of a walkway leading past a large Marula tree to the school building. Parking is restricted to just inside the entrance place the emphasis on pedestrian circulation. The red clay-brick paved parade-ground between school and hall focuses on the Marula with three flagpoles on the eastern side. On the west, the sports fields entry gates use the parade ground as a feeding area for large regional sporting events.

Not only for dining, the hall is also a community facility and hence provided with a lobby on the public parking side with space for ticket sales. Its more quotidian incarnation as dining and school assembly hall is accessed via large sliding doors on the North. Learners can enter en masse without bottlenecks forming. The sliding doors open onto a generous shaded veranda, which acts as daily milling space (while waiting for rain-showers to blow over) and as outdoor stage to the parade-ground.

Sports facilities comprise a gravel athletics track around a grassed soccer field, 6 hard courts (tennis, netball and basketball), male and female dressing rooms with equipment stores and shaded bleachers. The dressing rooms also have a lank to the hall, which can be used as indoor gymnasium.

The ten double-storey hostels consist of two wings, with the wet areas clustered next to the staff flats and barrack-type bedrooms opposite. The beds are built-in concrete double bunks with steel ladders and guardrails with lockers at the foot. A continuous central study counter separate the two rows of beds. Smaller rooms for seniors are placed at the entrance end of the bedrooms. The hostels cater for learners from all the grades, so that seniors can mentor juniors and the school can be grouped into five “houses” for inter-house competition.

Twenty staff housing units, which include two matron’s flats, are located at the hostel. Further staff housing is placed on the north-east perimeter to allow for individual access to a town road. This reduces the need for internal vehicular circulation, as staff can drive in directly from the road to their houses. Added staff flats are planned in this area.

Apart from the entrance Marula, a medium sized baobab features at the walkway to the hostels. Most of the existing trees and shrubs were retained and pruned during the construction period to become shade trees. this was augmented by locally indigenous landscaping to eventually create a woodland effect between buildings as shelter in the hot climate.

Power and water services had to be provided, as the Divundu network will take a further 2 years to complete. Ground water-tanks and booster pumps replaced the usual high tanks and river water is fed through a purification system into these tanks. Semi-purified water is diverted earlier to irrigate the soccer field.