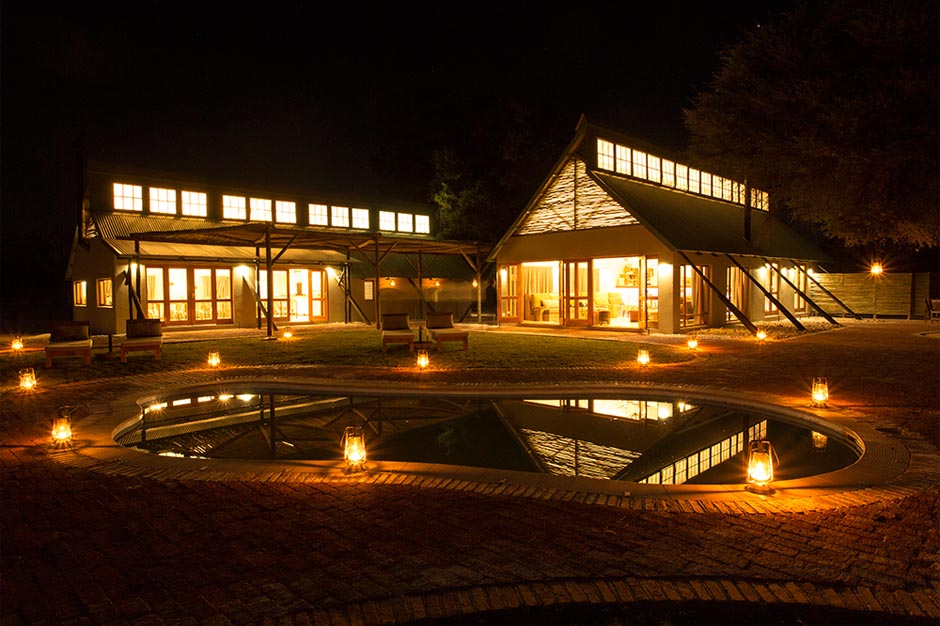 The new Kalahari Game Lodge shows that you do not need climatically inappropriate thatch and loads of mosquito gauze to have a luxurious wildlife experience.

The existing buildings did not perform during the hot summers and freezing winters in Koës, neither did the appearance of a 1970s Parks Board facility and dark and claustrophobic spaces appeal and had to give way to something new. Rather than demolish the buildings, the architect advised to reuse existing structures as this was both financially and ecologically more sustainable.
Deteriorated thatch roofs were removed and replaced by corrugated iron sheeting with iso-pine insulation, with a design that allowed for a clerestory windows at the ridge of the roof. The “before” and “after” differ so much that one could view the Main Lodge as completely new.

The interiors needed a complete refurbishment. Existing floor tiles were removed and replaced with white cement screed, and gum poles were whitewashed to create a lighter interior.
The existing rooms were quite low and an incision into the low side of the pitched roof enables guests to sit in bed and provides a unifying shelf element in the space. New side dormer windows lend a sense of spaciousness to the bedrooms.

Half of the bedroom units did not have bathrooms whilst the other half opened directly onto kitchenettes. It was important to remedy this and to include showers in the new layout.

The dining and kitchen building was reconfigured in a similar way as the bedroom units, whereas the bar and lounge space was completely guttered and extended. It is now a spacious open plan room with a circular bar at the rear and comfortable lounge with fireplace at the front. Insertion of large side windows and doors into these spaces increased the seamless integration of inside space to the landscaped outside space. Outside additions include new seating, fireplace areas, a swimming pool and extended viewing platforms. Matching built-in interior furniture was designed for the bar, dining buffet and reception and craft display. Loose furniture, fabrics, light fittings and deco were chosen in a close cooperation between architect and interior designer.