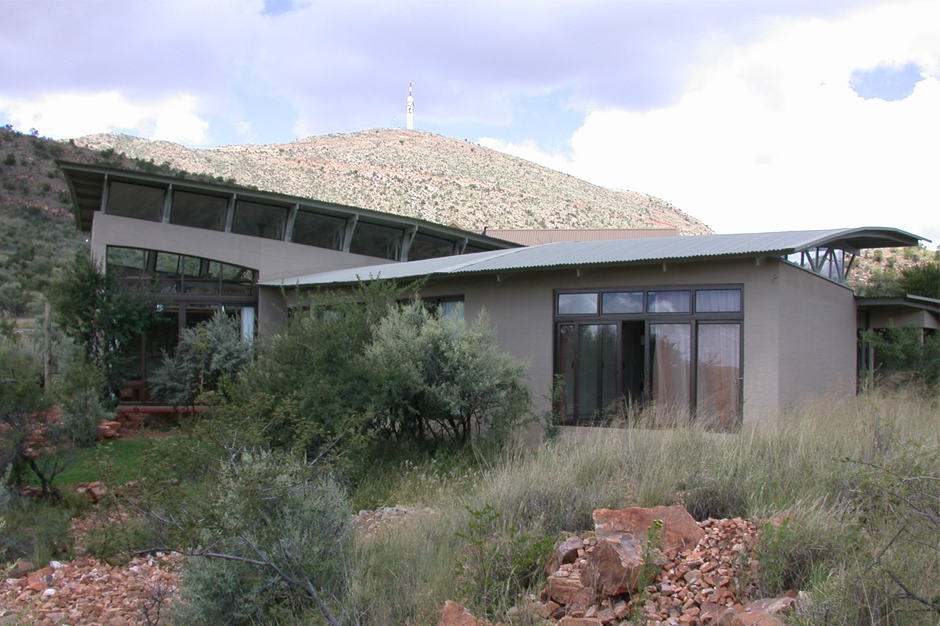 CONTEXT
“Aredareigas” is Windhoek’s first estate development located on the historical Regenstein farm about five kilometres south of Windhoek. At the turn of the century, Regenstein was used by the German military to stable their horses, as it was much higher and cooler than Windhoek in summer, preventing outbreaks of horse sickness. The housing area is located dramatically at the top of a steep valley up which a single lane road crawls and possesses magnificent views over surrounding nature.

The development’s “nature estate” guidelines revolved around a respect for nature. The clients, a young professional couple (respectively an environmental management consultant and a structural engineer) presented the architect with the chalenge to create a contemporary farmhouse within these rules. As the environmental consultant for the site, Mrs. van Zyl was also keen that the houses epitomises the spirit of an alliance with nature.

BRIEF
The house consists of the conventional three bedrooms, two bathrooms (one en-suite), and kitchen-living-dining. The clients wanted large spaces, built as economically as possible. They also wanted a verandah, a study/ painting room, an outside shower and plans for a future guest flat and garage which they could not afford under the present budget. Views were critical, with every space to maximise views, as well as doors that open out onto the landscape.

Their original idea was to have a conventional southern-african farm-house with pitched roof and gables, but when presented with the sketches for a more organic contemporary concept, they were enthusiastic, albeit nervous at the prospect of its realisation.

SITE
The erf is the smallest in the development, a thin wedge at the start of the curve of erven from the valley top along the crest of the hill. About half the size of the other erven and an awkward shape, it still offered the benefit of not overlooking other houses. Facing east, it has no impediment to the view, which is most dramatic on the east, northeast and southeast sides. It slopes slowly from its western point to the eastern base of the wedge to drop suddenly into a ravine.

An almost continuous western breeze cools the site and can be unpleasant in winter. Another constraint was that the main approach road to the development lies along the Northwestern edge. Both clients and architect also wanted to minimise the visual impact of the house on the views from the erven above.

The site contained several Acacia reficiens and Combretum apiculatum trees, as well as being densely covered with Tarconanthus camphoratus bushes, seasonal perennial grasses and number of smaller indigenous shrubs, bulbs and succulents. The building was placed between the trees and a work area of 1.5 metres demarcated all round, with all the trees in this area also protected. The clients intend to garden within the framework of the original bush and the flora was thus to be protected.

CONCEPT
The architect’s initial emotional response to the site was to visualise a bird alighting on the site or about to take off soaring into the breeze over the valley. With spread wings, it hunkers down in the vegetation, almost invisible from above.

This led to the creation of two wings, one housing the public areas in an open plan, and the other with the bedrooms and bathrooms. The two wings spread open to the northeast, to optimise solar orientation without losing privacy from the road.

The two wings also frame an open “courtyard of nature” on the northeast side, to merge with the landscape. The bedrooms face this courtyard squarely to the east and the valley view, with the small bathroom “pods” on the west protecting the bulk of the wing against the afternoon sun and the view from the road to the side above. The en-suite bathroom sneaks around the north corner to benefit from the valley view.

Both wings step down the site, with the private wing hunkered behind an earth berm and the public wing’s roof rising to accommodate a mezzanine study area above the sunken lounge.

The views from the public wing are more complex – framing different aspects of the site all round and opening sections to obtain winter afternoon sun, as well as views to the southern mountains and cliffs.

The walls are faceted to reinforce the concept of an organic bird metaphor and form the internal wedge shape of the public wing as a telescope overlooking the view. The facets also help to break down the building mass into shapes more easily visually assimilated into the site. All the internal spaces were originally wedge-shaped, but the clients felt uncomfortable with these in the bedrooms and bathrooms, so internal spaces are kept orthogonal in the public wing.

The spaces in the public wing are demarcated by means of a floor level change between dining and lounge, and the open-plan kitchen consist of a series of framed “boxes” housing the various work areas and screening the scullery, with a central work island “box” floating in the centre. Above these, the trusses float from small and low to large and high, giving an intricate play of light and pattern on the ceiling.

The roofs curve into the site with shaded clerestoreys at the top ends to create the impression that they hover over the house – at the same time anchoring the building to the site and allowing it to hover. Inside, the roof curves are exposed to create a feeling of spatial flow through the house similar to the cross-ventilation airflow. Overhangs are elongated in strategic places to give privacy or shade to specific windows.

MATERIALS & FINISHES
The house is built from standard load bearing brickwork with concrete ring beams. The walls are bagged and painted with an earthcote cement-based paint. All finishes and colours were kept as close to the natural as possible, to blend in with the site surroundings and the serene feel of the well-lit interior.

SA pine timber trusses bolted together and stained white are exposed in the interior and frame the clerestorey pivot windows. Unfortunately, the client did not make all the windows in the public wing openable, for cost reasons. The window and external door frames are brown anodised aluminium with safety glass where needed. Interior doors and frames are timber