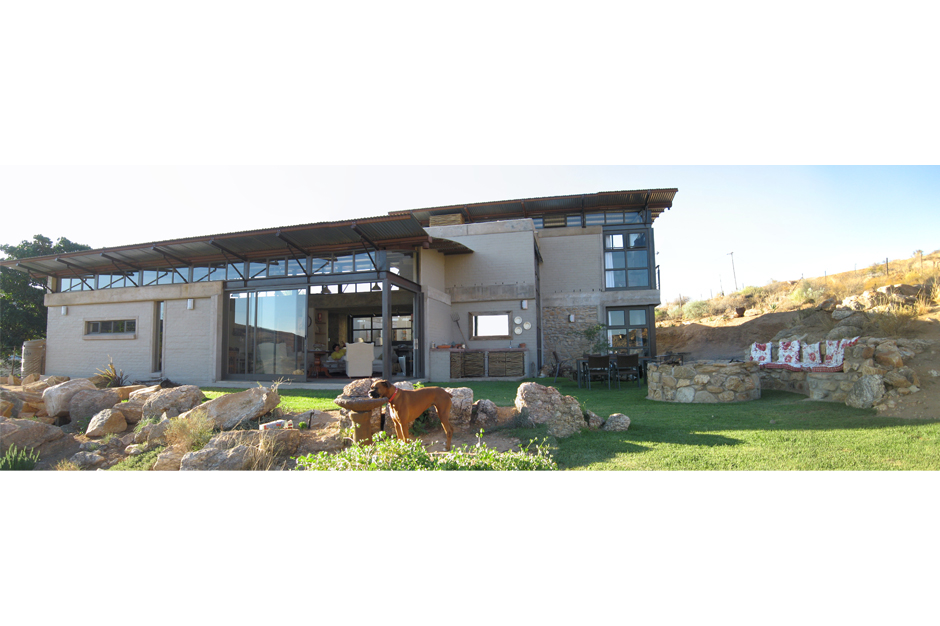 HOUSE VAN DER MERWE
House van der Merwe is situated in the small town of Springbok in the Northern Cape. The site is located towards the top of a valley with spectacular views of the surrounding koppies, distant plains and granite domes to the south and east. Although the erf is quite large (about 2182 m2), the area suitable for construction is limited to a relatively flat piece of land closest to the Northern boundary of the site. The erf is surrounded with residential houses along the southern and western boundary. The eastern boundary is undeveloped and because of a koppie and therefore still in its natural state with plants and rocks natural to this area. Access to the site is from the road on the northern side of the erf. Springbok is prone to receive hot winds from the east, cold winds from the south and rain from the north-west.

These conditions inspired the courtyard design with west to east elongated building shapes. The house consists of a series of smaller buildings arranged around the courtyard, each with its own specific function. The placing of the buildings around the courtyard was greatly influenced by the views. The building assigned with the most prominent view is the heart of the house where most social activities will happen. It is a combination of the living room on the east wing, kitchen and dining on the west wing with a double-sided fireplace in the centre of this room, spreading heat to the living area and the kitchen-dining. The chimney also radiates heat to the room. These areas have direct and undisturbed access to the views

The south-east corner of the living room consists of glass sliding doors that slides away from the corner to allow the living room to open up to the outside and become one with the deck and surrounding natural landscape. To the north of the living room is a service strip containing the scullery, guest bathroom, the entrance and study space.

Leading from the living room is a generous passage that takes one past the stairwell to the bedrooms. The passage has a big sliding door opening out onto the courtyard to allow the bedrooms to function separately from the house. Because of the untouched nature of the eastern boundary, all bedrooms were placed at the foot of the koppie on the east to have both privacy and beautiful views. One of the bedrooms is placed on the north side of the courtyard. The service yard is located to the west side of the courtyard. It forms a barrier between the neighbour’s house on the west and the courtyard. The outside sink, washing line and proposed recycle yard and compost heap is hidden from the courtyard behind a dropper screen running between the garage and house. The scullery has a view over both the internal courtyard as well as the service yard.

The garage is pulled right to the northern boundary to ensure that the internal courtyard is as big as possible. The courtyard is surrounded on all sides by buildings and you enter the courtyard on the north side on the right of the garage.

The courtyard acts as a big lung planted with trees and plants – during warm nights it will be safe to open doors and windows onto the courtyard to allow the cool air that collects there into the house. The grey water from the washing basin in the scullery and guest bathroom can be directed to the plants in the courtyard.

Each building contains two types of spaces; the ‘living’ area and the functional service area required for the functioning of the ‘living’ area. The roof over the ‘living’ area is slightly curved to mimic the koppies all around. These curved roofs are alternated by flat roofs over the service area. These top of the flat roofs will be used to place the solar hot water geysers and air conditioning. As the flat roofs are lower than the pitched roofs, views of these items will be obscured, yet not totally obstructed. The flat roof over the scullery and entrance is an accessible sod roof and breaks the north facade of the living area. The plants also help to cool the area in front of the northern clerestorey windows.

It was important to always allow views to the south and east without compromising access to natural sunlight. Therefore, each building has north facing clerestorey windows above the flat roof to allow light into the living part of the building. The walls are thick, especially on the east and west facade with large overhangs all around to shade the walls.

The stairwell acts as a ventilation tower to the bedrooms and living area. The double volume area has a wall of glass that faces east. This will heat up the air in the stairwell in the morning. Hot air rises and leaves the stairwell through the opened top windows. Cooler air from outside enters the building through opened bottom windows. As air circulates, ventilation is created. To cool the air down, a water feature is placed at the bottom of the stairs. Water flows from the roof above down chains into the pool and circulates back to the roof. The constant flow of water moistens the air and as air flows over pool and through moistened air, it cools down and humidifies the dry warm air. The western wall of kitchen is made extra thick by having a 220mm natural stone wall on the inside (collected on site) and a 220mm brick wall on the outside. Other west and east facing walls have 110mm cavities to trap air and insulate the building.