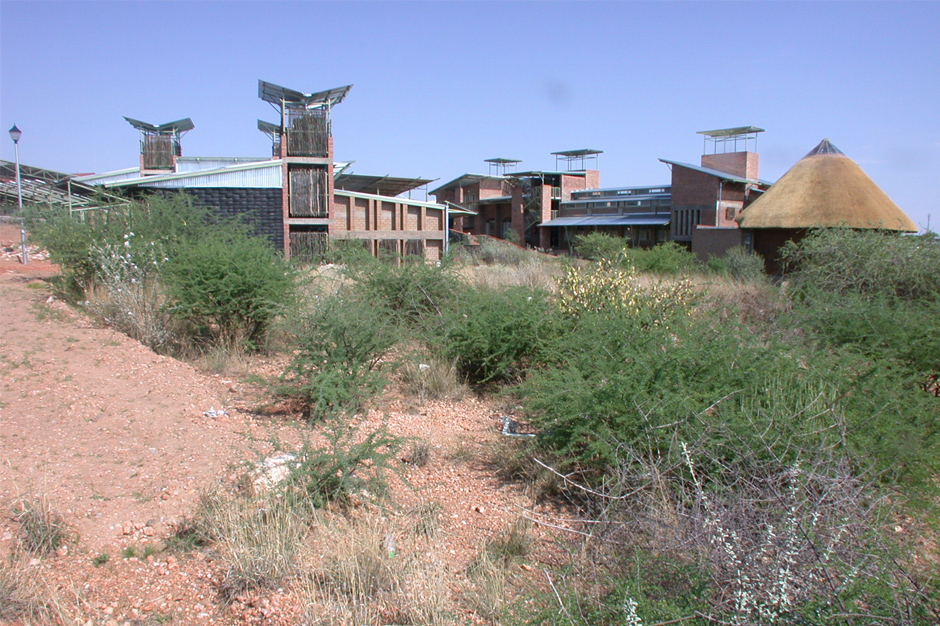 The appointment for this project was as a result of a design competition won in 2002. Following the competition, the clients groups and architect work shopped the project to the extent that several changes to the brief were made. Though the philosophy and overall concept remained the same, this meant that the appearance of the buildings changed considerably. from the competition entry.

The HRDC’s main function will be the research into and promotion of sustainable housing in Namibia. It will also provide office space for related organisations such as the R3E (Renewable energy & energy efficiency bureau) and the country manager of the UNDP Habitat Programme.

Phase 1A consists of the administrative wing and was completed early in April 2004, with Phase 1B, the public wing, under construction and due to be completed September 2004. The design focused on several sustainability issues, such as full passive solar design, conservation & re-use of water, low embodied energy materials, recycling of waste and secondhand materials. This article focuses on the materials.

Compressed soil-cement bricks were made on site using the Hydraform system, a patented machine rented from a local builder and stockpiled sand from Otjomuise, a few kilometres away. The bricks are profiled and dry-stacked, plastered only around window reveals and in corners.

Timber “droppers” or “latte” were cut from invader prosopis trees in the valley north of the industrial area by local SME’s, de-barked and treated on site by soaking in a mixture of old motor-oil. An alternative method would be to debark by charring slowly over a bed of coals, as the bark apparently releases toxins into the wood that prevent insect attack. These “latte” are used extensively for shade & security screens in front of windows, extensions of overhangs and walkway shading.

A large gabion retaining wall was constructed using site-made wire baskets and concrete rubble from a demolition site. The wall created is over 5 m high in places and very impressive, with the recta-linear rubble blocks creating a regular pattern in a contemporary style.

The same demolition site also provided secondhand steel windows and bricks reclaimed from the rubble. After cleaning, the windows were found to be much more sturdy and solid than new products.
Old car tyres were used to build the archive walls in the classic “earthship” technique, stacked on top of each other and rammed full of a soil-cement mixture. As the stockpile contains no clay, cement had to be added as a binder, although the project tried to reduce the use of cement as far as possible. Their thickness & solidity are very apparent and are highly effective thermally. The tyres, filled with soil only, also made large curving retaining walls and are already being overgrown with indigenous grass species after recent rains.

Local riverbeds are being infested by an invasive “Spanish” reed, which was harvested by local unskilled workers to provide ceilings as well as cladding for cupboard units. The ceilings conceal three methods of insulating the corrugated iron roofs – old feedbags filled with wool and lavender (to prevent moth infestation) or with waste polystyrene alternate with layers of flattened corrugated cardboard boxes. The insulation is at least 60 mm thick and fixed between the purlins with an air gap above. The thinner reeds in the cupboard doors are backed with thin hardboard.

Shades for light fittings were made by a Namibian small business from the perforated tubes and paper of car filters as well as old printing plates. (All fittings are fluorescent or compact fluorescent to reduce energy consumption). The long shades for the office fluorescent lights were developed specially for the project.

Waste mica stone from the excavations of a nearby filling station provided paving and site walling materials, with two Namibian clay brick types used in the building. As secondhand steel was difficult to obtain, columns and roof structures were made from “B” grade steel which was considerably cheaper and necessitated a small amount of remedial work to joints.

Additional methods such as rammed earth and sun dried clay bricks will be ventured on during Phase 1B, but the current work has already proven the ability of a conventional contracting team to adapt to the demands of unconventional materials while employing a large number of unskilled workers in addition to their own team. Future phases will include training and lecture halls where these new skills will be taught to a much broader base and hopefully influence the construction industry to a more sustainable direction.