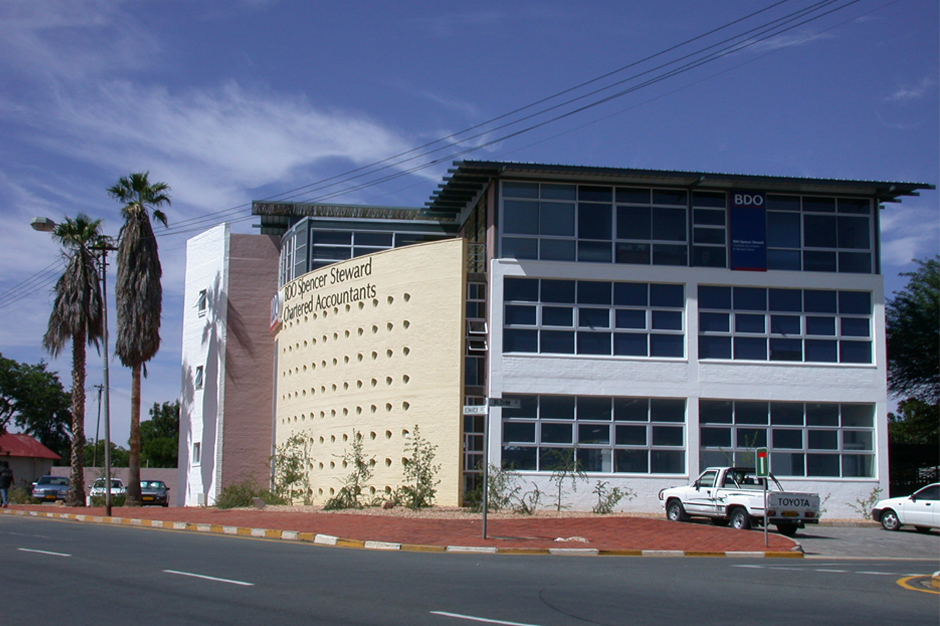 The client, BDO Spencer Steward, required a large modern building to house their fast-growing auditing company. Their existing premises (incidentally a historical house) were too restricted and convoluted and could not be extended to house their full staff complement in a rational manner. When this site became available, it was “grabbed” with much enthusiasm.

The building is very prominently situated on a rise where Peter Muller Street (which runs from the Christuskirche, the main Windhoek landmark) terminates in Bismarck Street (the prestigious small office location, with mainly German Colonial houses converted to offices).
The existing site had a small dilapidated historical building on it, which was rated very low on the historical listings. Even though such a historical buildings “list” exists in Namibia, it is not administered and building owners tend to ignore historical value. Thus when BDO Spencer Steward bought the site in 1999, the existing buildings were already too damaged to be salvaged. (A compensation for this was the planting of 2 historical palm-trees at the intersection during the project).

BDO’s brief to the architect was very specific: a simple square block, 3 storeys high, which was to look as large as possible, to maximise views, to allow for expansion in future, and to be very cheap.

Municipal restrictions were excessive, with a small bulk factor and a parking ratio that required two-thirds of the site’s surface. In conjunction 3 of the 5 erf boundaries were on roads and so close to intersections that access was very limited.

The building is set at the head of Peter Muller Street as a truly urban element. No “ring-muur” surround it, urban space flows freely up to the front door, which is set as a vertical cleft facing the road.

The partis is simple, consisting of two modular office wings on either side of an atrium, shielded at the east by the services block and meeting rooms - the latter expressed by a curved screen wall with repetitive small curved triangular windows which are faintly reminiscent of African adobe architecture with small punctuated windows.
Expansion is allowed for in two ways - the ground floor is currently being let, but will accommodate growth in a few years, and open space to the west is kept for the addition of another office wing module should added bulk be approved by the local authority.

The office wings are open to the atrium to allow views between different departments, with weldmesh and dropper screens on the ground floor providing internal security to the tenants. First floor houses open-plan clerical areas with cubicle offices to the south side for confidential functions. The top floor contains management offices and boardroom.

The atrium dominates the interior with a sturdy open steel-frame stair with thick dark timber treads which ascend along the atrium length. Four fever trees (Acacia Xantophloea) set in rustic red clay-brick paving create a filigree texture counterpointing the rawness of the office-shutter concrete columns and ceilings. As the paving extends from the street into the atrium, it creates an inversion of inside-outside space.

Strongly influenced by climatic considerations, the building displays common-sense responses to the strong Namibian climate - more solid east and west facades; large roof overhangs, stack-effect ventilation in the atrium, cross-ventilation through-out. However, a twist was added by utilising droppers in the overhangs over the atrium to create ladder-pattern shadows over the staircase and by using 1950’s pre-cast shield-shaped concrete window blocks in the east curved screens. These allow morning light to penetrate deep into the building in small dots and create a starlit facade at night (accountants often work late). These window-blocks are named either ‘flat-irons’, ‘samoosa’s’ or ‘fish-heads’ by the ever-inventive Windhoek public, who also calls a white-tiled church down the road “the bathroom church”.

Cost restrictions were utilised as a strategy to express the architect’s philosophy of appropriateness to context - there is an interweaving of non-literal references to African and Western heritage by means of using inexpensive local materials (corrugated sheeting, weldmesh, clay-bricks, droppers, local slate) against more sophisticated elements (aluminium windows, top floor steel structure and balustrades) together with the industrial expression of exposed concrete soffits and roof trusses. As a matter of interest, the capital costs per square metre were about half the accepted current rate for office buildings in Windhoek.

In contrast to the conventional office building, which generally aims to exclude the outdoors, inside this one the staff are continually made aware by the passing of the sun around the building through small drops or shafts of light falling down a stair. The staff can also manipulate the outdoors coming in by tilting or closing their blinds, opening and angling windows. All offices have large windows for views, as the site affords 360º views over the city, the Auas mountains south and the Khomas Hochland to the west.